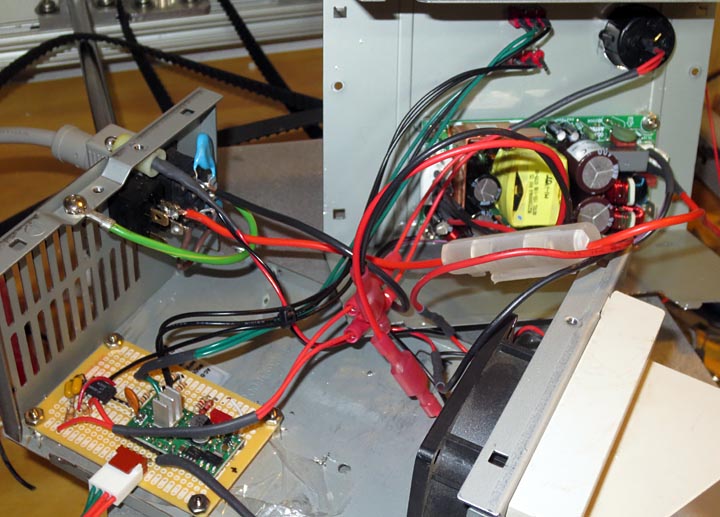 As I near completion on my 3D printer build, I found myself needing a way to drive stepper motors to quickly test axis motion (watch the video at the end of this post).  To that end I threw together this low cost stepper motor drive.  It is based on a Pololu A4988 stepper motor driver being run by a 555 timer set up as an oscillator.  I wanted something cheap that I could quickly throw together to test the motion on the axis as well as keep handy for future stepper motor projects. I spent a little more time on this project then it warranted but now I have a great little stepper motor drive for testing future projects. 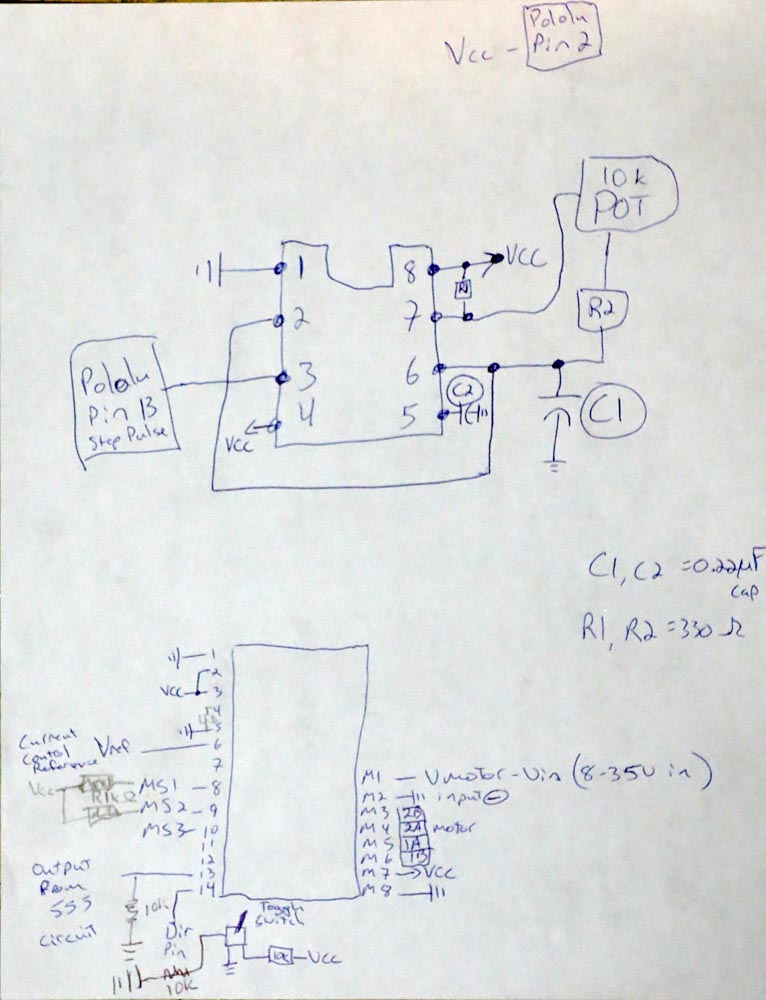 The circuit diagram above shows the basic schematics for the stepper motor drive. Sorry about the chicken scratches on paper version, but all the info is there if you want to make one of these for yourself.  As always if you have any questions shoot me an email at:  zac AT projectsbyzac.com  The 555 timer is run as an astabile oscillator to generate the step pulses to drive the Pololu A4988 stepper driver (A4988 data sheet is here) & (Pololu A4988 datasheet is here) .  If you’ve read my previous post on building a cnc machine control box based on Pololu 4988’s you know I love these little stepper drive boards. They are similar to stepstiks (drop in pin for pin replacements in fact) which will eventually run the 3d printer on the RAMPS electronics which just arrived.  There are newer drop in higher performance Pololu models available now but I had a A4988 green boards on hand.  To allow for variable motor speed control I used a 10 turn 10K potentiometer inline in the 555 circuit.  This allows the drive speed to be varied by turning the knob.  The pot I used has a digital read out.  When I find a speed that works well to test a particular motor/axis drive, I can easily set it in the same speed in the future.  Thanks to Adam Perkins for these 10 turn pots. I traded him some parts a few years back for a few of these 10 turn pots with read outs. This is the first project on which I have used one of them.  He has a very useful webpage with great info on electronics and is my electonic project mentor from my UNH Days.

The circuit is soldered up on a small board from Radio shack.  I’ve housed the entire project in an old PC power supply case.  I love using PC power supply cases for projects and always have a couple on hand in my parts inventory.  They have good cross flow cooling, built in fan, switch and power cords making them the perfect project enclosure.  The pololu A4988 can handle up to 2.0 A with a heat sink and air flow for cooling which the power supply case fan supplies.  To power this project I initially used a spare 12v 2.0A wall wart installed. The supply was noisy and it was affecting the stepper motor drive output.  Additionally when it was driving the motors I could hear the cooling fan speed decrease, so it wasn’t up to the current draw needs of the motors being tested.  I changed over to an Astec LPS50-M Series 60 Watts power supply I had on my parts shelf.  This supply could easily handle the motor load and would provide a clean 15 volts,  the supply used was an Astec LPS54-M (datasheet for the LPS54M powersupply is here). 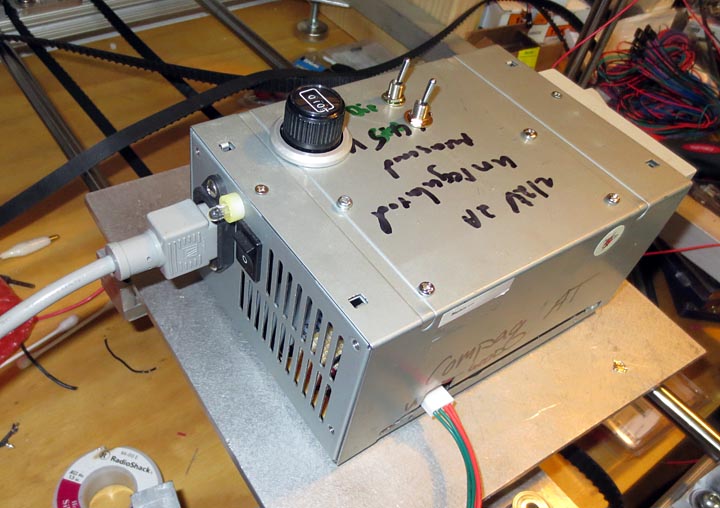 The above photo shows the finished product.  I used my CNC machine to mill out the top of the case for the pot with the readout and drill holes for mounting the power supply and the 2 toggle switches.  One switch controls the direction of the motor (dir pin #14 on the pololu) and the other interrupts the signal between the 555 oscillator and the step pin (pn #13 on the pololu) allowing to start and stop the stepper motor without powering down the controller.

The above video shows the driver being used to test the Z axis on the 3D printer. I have the current control way down so when raising the axis the motors struggle a bit (the sound you hear changes from the smooth driving on the way down).  I thought some of you might enjoy the video clip. There will be more videos as the printer is further tested now that I made a youtube account to host them.